Colleen and I were referred to Organ Stop Pizza by a local who was sitting in the row in front of us at the Spring Training Game. So after we had been out and about all day Sunday, March 6, 2016, we stopped to get something to eat and check out this place. I took the following information from the internet. I felt it explained it best how Organ Stop Pizza in Mesa AZ came to be what it is today.

In 1972, the original Organ Stop Pizza restaurant premiered in Phoenix, Arizona at the corner of 7th Street and Missouri Avenue with a Wurlitzer pipe organ which was originally built for Grauman’s Hollywood Egyptian Theater. This unique concept of a pizza parlor with a pipe organ was envisioned by William P. Brown, a Phoenix real estate developer whose enthusiasm for the theater pipe organ and its music led to the creation of this landmark attraction.

The phenomenal success of the Phoenix restaurant prompted plans to open another Organ Stop in Mesa. It opened in 1975 near the corner of Dobson and Southern Avenue with a Wurlitzer organ from the Denver Theater in Denver, Colorado. In the theater, the Denver instrument had 15 ranks or sets of pipes. The instrument was totally rebuilt, and the decision was made to enlarge the organ to 23 ranks for its debut in the new Mesa Organ Stop.

The success and popularity of the new Organ Stop Pizza mirrored that of the Phoenix location. In 1984, Bill Brown decided to retire from the restaurant business. The Phoenix Organ Stop was sold to a real estate developer, who sold the pipe organ and demolished the building in favor of an office complex. Incidentally, that instrument was sold to a couple in Downers Grove, Illinois, for installation in their home! The Mesa Organ Stop was sold to a longtime employee and manager Mike Everitt and his business partner Brad Bishop. Under the new ownership, improvement of the pipe organ became a high priority. Over the course of the ensuing years, careful acquisition of rare pipework and percussions were made, culminating in what is now the largest Wurlitzer pipe organ in the world. With the change in ownership, the restaurant continued to gain in popularity. Inevitably plans were made to move into a facility twice the size of the original in order to accommodate the ever-increasing number of patrons and ever-expanding organ. This new mega-facility, located at the corner of Stapley Drive and Southern Avenue, was designed specifically to accommodate the expanding scope and size of the Organ Stop Wurlitzer. Construction of the new facility began in May of 1995 and the grand opening was Thanksgiving weekend of that same year.

In its new and improved location, Organ Stop Pizza and it’s Mighty Wurlitzer has come to be known as the biggest and best in the world as attested to by many of the world’s finest theater organists and, more importantly, the hundreds of thousands of patrons who visit each year. There are continuing efforts to make additions and improvements to the organ, endeavoring to fine-tune the instrument closer and closer to perfection. 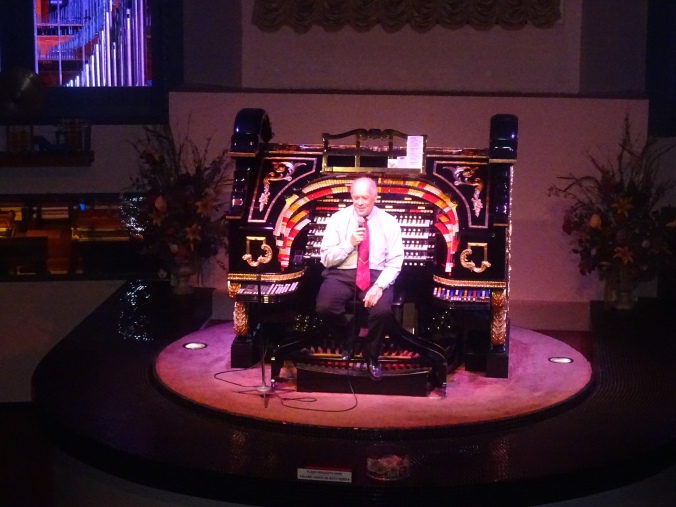